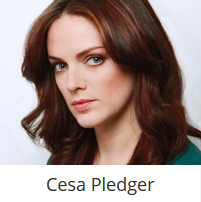 Born in Douala, Cameroon, Cesa moved to the states when she was a young girl. She was raised by her mother, Delfina, in Manchester, New Hampshire. She has two older sisters, Nicola and Alexandra. Cesa attended the University of Florida and has a bachelor degree in Building Construction and a Masters in Business. She is passionate about football and an avid fan of the Florida Gators and New England Patriots. She worked as a project manager on The New York Times Building and the WTC Memorial projects in New York City. She left her construction career to pursue an acting career full-time in 2009. She participated in and completed the ING NYC Marathon in 2009.